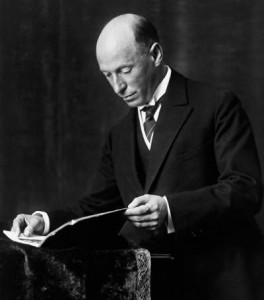 With his works, Abd-ru-shin offers each person assistance to be able to mature into an inwardly secure, strong personality. In his lectures on the basic questions of human existence — concerning life and death, fate and justice, God and His Creation — a view of the world is revealed that is conclusive, with its flawlessness and consistency yielding a firm anchor of knowledge.

“My aim is of a spiritual nature!

“But I am bringing no new religion, I do not wish to found either a new church or any sect, but in all simplicity I give a clear picture of the automatic activity in Creation, which bears the Will of God, and from which man can clearly recognise what ways are good for him.”

In line with this fundamental idea, Abd-ru-shin wanted his Message to be seen as the focal point but never to draw attention to his person as the centre of the Grail teaching. He rejected any personality cult. He clearly and unmistakably bade his readers: “Heed the Word and not the bringer”.

Abd-ru-shin was born on 18th April 1875 in Bischofswerda (Saxony) and baptised Oskar Ernst Bernhardt. In the safety of his parental home, his was a happy childhood and adolescence. After this came commercial training and professional independence in Dresden.

In the years that followed, Oskar Ernst Bernhardt travelled extensively and developed more and more from a businessman into an acknowledged author. His literary work embraces travel books, novels and narrative accounts, among others. As a member of the Association of German Playwrights he also wrote dramatic works, several of which were successfully premièred in Leipzig and elsewhere.

After having lived in Switzerland and also America for a time, Oskar Ernst Bernhardt made his way to London in 1913. There he was caught up in the outbreak of the First World War and in 1915 was interned on the Isle of Man. In the spring of 1919 Oskar Ernst Bernhardt was able to return to his homeland where he then became aware of his actual life’s task. This he recognised in the course of mediating to others from the comprehensive Creation-Knowledge that he bore within himself.

For the Grail Message, which he wrote down from 1923 — at first as what were called “Gralsblätter” (Grail Papers) and also public lectures, later in book form — Oskar Ernst Bernhardt used the pen-name Abd-ru-shin.

This name is composed of Persian-Arabic elements with the meaning of “Servant of the Light” or “Son of the Light”. It was chosen in reference to a former earthlife, and was henceforth to be inseparably linked with his Work.

In 1929, a year after Abd-ru-shin had found that earthly home on Vomperberg in the Tyrol (Austria) where he intended to complete his Grail Message, he felt obliged to speak out against the Nazi ideology.

Thus he said it is “unworthy of a true human being” to discriminate between races, nations or religions:

“That is too petty, and unworthy of the true human being. Do these people believe that they may one day enter the Kingdom of God with national colours and anthems? […] Besides, how one-sided are these racialists, who attempt to judge merely by outer things, by gross matter, whereas the actual man is the spirit, which alone is decisive . And this spirit is older than the present and the former physical body. Just let us consider it in the purely earthly sense: A good man will always be the same, even when he changes his clothing repeatedly. In his everyday attire he is exactly the same as he is in his Sunday clothes. It is no different with the spirit, the actual man.”

Fanaticism, defamation and denominational dogmatism are incompatible with the Grail Message, which as a fundamental condition presupposes a readiness for independent, objective and unprejudiced thinking.

In 1938, immediately after the seizure of power by the Nazis in Austria, the “Grail Settlement” on Vomperberg, Tyrol, which had come into being in the meantime, was expropriated without any compensation. On the 12th of March, Abd-ru-shin was arrested and later, from September 1938, placed under surveillance by the Gestapo — at first in Schlauroth near Görlitz, then in Kipsdorf/Erzgebirge.

With that, Abd-ru-shin’s beneficent work was terminated; those in authority at the time denied him any further activity in fulfilment of his Mission. On 6th December 1941 Abd-ru-shin died in consequence of these measures. His physical body was interred on 11th December 1941 in his birthplace, Bischofswerda. Only in 1949 could it be transported in state to Vomperberg, when after the end of the war the Grail Settlement had been restored to Abd-ru-shin’s widow, Maria Bernhardt, by the authorities.

There are numerous accounts from those who were able to become acquainted with Abd-ru-shin personally and who were deeply moved by his simple naturalness, but also by his majestic and at the same time gracious manner. A report in a Munich newspaper in 1933 recounts: “There is something mysterious about him that speaks out of the clear, keen and yet kindly glance of his eyes, and is like a greeting from luminous distances …”

During the latter years of his life Abd-ru-shin revised his Grail Message, and thus formed the “final authorised edition”. For more details see the website of the “Stiftung Gralsbotschaft”.